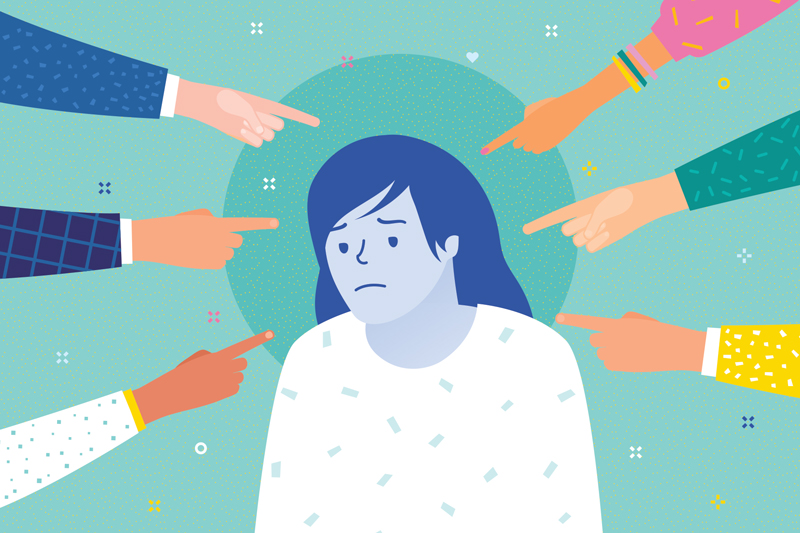 Projection is a psychological defense originally identified by Sigmund Freud in which one unconsciously attributes their feelings or impulses onto another. The other carries our flaws and is responsible for our misery. Projection is a conflict between unconscious feelings or impulses and conscious beliefs or values. Projecting the feelings onto others or situations is an attempt to externalize the problem. An example of projection is when a husband who has suppressed sexual desires for a coworker, then accuses his wife of being unfaithful.

Tom Hanks as Chuck Nolan in Cast Away projects his fears, disowned self or unconsciousness onto Wilson, the volleyball. He attempts to make the unconscious conscious by giving voice to his fears, transferring the ownership of difficult or unwanted feelings onto an external source. A person who is argumentative relates that others are angry and hostile denying their own feelings and behaviors. Projection almost always comes with anger and is common with Narcissists, paranoid people, bullies and those with Borderline Personality Disorder. Bullies will focus on the insecurities of others rather than deal with their own concerns. They find the most vulnerable individuals and attack them without risk of emotional retaliation.

Projection is a form of blame shifting – “It’s not me, it’s them”. Because the feelings are unconscious and disowned, the individual denies any identification with the feelings or impulses. In fact, they often feel attacked and see themselves as the victim not the attacker. In addition, blaming a real victim is a common example of projection. A person is sexually assaulted and rather than focus on the actions of the perpetrator, the victim is criticized for somehow attracting the assault. “It was the way they were dressed, where they were, perhaps they drank too much, what did they expect to happen, etc.”

Projections are not always negative. There are forms in which an individual attributes positive wants, desires and fantasies onto another. This is very common with co-dependency. A person who is lonely and dating may meet someone and immediately find the person to be their soul mate – the perfect match without knowing them. They project their hopes, dreams and desires onto them. They see the smallest actions as confirming their feelings for them. They will often see things in terms of black and white. People may also project that others share the same values, skills or can do the same things as them. They take for granted that the other is like them instead of seeing them for who they really are.

Projection differs from transference in that transference involves at least three people. The individual attributes feelings and behaviors of someone else onto a third person. A person in therapy might say “my therapist is critical, just like my father”. They transfer their unconscious feelings towards their father onto the therapist.

Since projection is an unconscious defense mechanism, the only way to begin to resolve it is to become aware of the projection. If what is projected does not stick to the other, then we are forced to examine and pay attention to our own negative thoughts, feelings and behaviors. One way we can become aware is when the other person is clear that what is being projected has nothing to do with them. They might respond with, “That’s not mine, perhaps you should look in the mirror”. As children we used to respond, “No, you are”. This is a clue that we need to examine our thoughts, feelings and behaviors. If we find that we are experiencing guilt, having uncomfortable sensations in our bodies or having knee jerk anger, then we need to entertain the idea that what is going on reflects our disowned or unconscious self.

We can orient ourselves to what is happening in the present moment, focus on our breath and ground ourselves – ask ourselves: “Where did these thoughts or feelings come from? Who do they belong to? Why are they familiar (or as John Bradshaw spells it – family-ar)”. If possible, we process our thoughts, feelings with a safe person, group or therapist. We could journal our thoughts and feelings or use other creative methods to bring the thoughts and feelings to the surface – drawing, movement, singing, painting, meditation, etc. We can begin by seeing “Life as a Mirror”, anything happening in the outer environment is also happening to and within me. Reflecting honestly with forgiveness and compassion can begin to integrate the disowned self.

James W. Osborne, MS, LPC, BCPC is one of Natural Nutmeg’s 10 Best Winners for Holistic Psychotherapy/LCSW/Counseling. He is a Licensed Professional Counselor, Board Certified Professional Counselor, Board Certified PTSD Clinician with over 40 years of clinical experience. He employs Mindfulness, Jungian Psychology, Gestalt Psychology, ACT, EMDR and value-based techniques unique to the individual to support positive health changes. His undergraduate degree is in Philosophy and he views psychotherapy as philosophy in action. He can be contacted at: ProNatural Physicians Group in Berlin, CT at: (860) 829-0707.