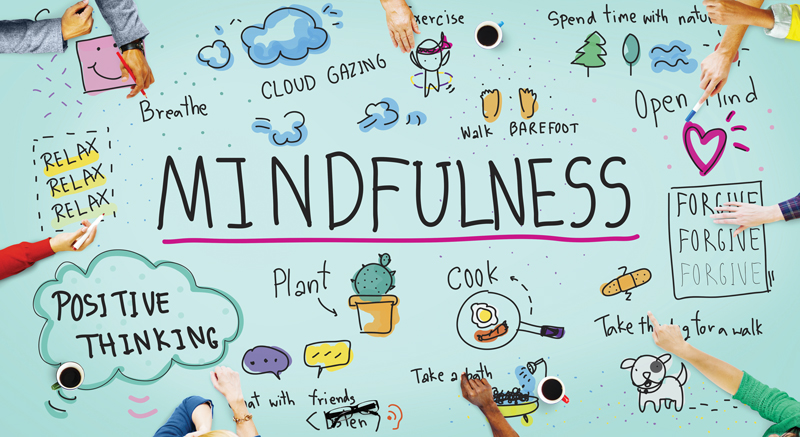 Since my article in the last issue of ELMTM Maine, I have been asked by several of you how to incorporate mindfulness to lose weight. The simple answer is to be present when you are consuming food. One of the techniques of mindfulness is to scan the body to see how you feel throughout your body without trying to change whatever is there or to expect relaxation….it is to feel what there is to feel without judging. For example, close your eyes, focus on your breath and begin scanning your body from your feet to the crown of your head. If you encounter an area such as your shoulders holding some tightness or tension, you don’t try to change the tension or even try to understand where it is coming from…you simply note that it exists and move the scan to your neck and head. This is not a time to say to yourself “I should relax” or “that tightness is causing my shoulder joint to ache”.

When you employ mindfulness techniques to food consumption, first start with scanning the body…are you actually hungry? Are you eating because you are bored, upset, anxious or angry? By being present with the answer, you know whether you are eating for a reason other than hunger or sabotaging your healthy relationship with food. From there you have choices…continue to eat, step away from the food, or choose something different.

Walter Mischel’s Marshmallow Study of the 1960s at Stanford University explains the phenomena wonderfully. During his experiments, Mischel and his team tested hundreds of children — most of them around the ages of 4 and 5 years old — and revealed what is now believed to be one of the most important characteristics for success in health, work, and life.

The experiment began by bringing each child into a private room, sitting them down in a chair, and placing a marshmallow on the table in front of them. At this point, the researcher offered a deal to the child.

As you can imagine, the footage of the children waiting alone in the room was rather entertaining. Some kids jumped up and ate the first marshmallow as soon as the researcher closed the door. Others wiggled and bounced and scooted in their chairs as they tried to restrain themselves, but eventually gave in to temptation a few minutes later. And finally, a few of the children did manage to wait the entire time. It’s great to watch replications of the study and you can view some on Youtube!!

As the years rolled on and the children grew up, the researchers conducted follow up studies and tracked each child’s progress in a number of areas. What they found was surprising. The children who were willing to delay gratification and waited to receive the second marshmallow ended up having higher SAT scores, lower levels of substance abuse, lower likelihood of obesity, better responses to stress, better social skills as reported by their parents and generally better scores in a range of other life measures.

The researchers followed each child for more than 40 years and over and over again, the group who waited patiently for the second marshmallow succeeded in whatever capacity they were measuring. In other words, this series of experiments proved that the ability to delay gratification was critical for success in life.

And if you look around today, you’ll see this playing out everywhere…

… and countless other examples.

Success usually comes down to choosing the pain of discipline over the ease of distraction. And that’s exactly what delayed gratification is all about. This brings us to an interesting question: Do some people naturally have more self-control and thus are destined for success or can you learn to develop this important trait?

What Determines Your Ability to Delay Gratification?

Researchers at the University of Rochester decided to replicate the marshmallow experiment, but with an important twist. Before offering the child the marshmallow, the researchers split the children into two groups.

You can imagine the impact these experiences had on the marshmallow test. The children in the unreliable group had no reason to trust that the researchers would bring a second marshmallow and thus didn’t wait very long to eat the first one. Meanwhile, the children in the second group were training their brains to see delayed gratification as a positive. Every time the researcher made a promise and then delivered on it, the child’s brain registered two things: 1) waiting for gratification is worth it and 2) I have the capability to wait. As a result, the second group waited an average of four times longer than the first group.

In other words, the child’s ability to delay gratification and display self-control was not a predetermined trait, but rather was impacted by the experiences and environment that surrounded them. In fact, the effects of the environment were almost instantaneous. Just a few minutes of reliable or unreliable experiences were enough to push the actions of each child in one direction or another.

How to Become Better at Delaying Gratification

Before we go further, let’s clear one thing up. For one reason or another, the Marshmallow Experiment has become particularly popular. You’ll find it mentioned in nearly every major media outlet. But these studies are just one piece of data, a small insight into the story of success. Human behavior (and life in general) is a lot more complex than that, so let’s not pretend that one choice a four-year-old makes will determine the rest of his or her life.

However, the studies above do make one thing clear: if you want to succeed at something, at some point you will need to find the ability to be disciplined and take action instead of becoming distracted and doing what’s easy. Success in nearly every field requires you to ignore doing something easier, in favor of doing something harder (delaying gratification). The key takeaway here is that even if you don’t feel like you’re good at delaying gratification now, you can train yourself to become better simply by making a few small improvements. In the case of the children in the study, this meant being exposed to a reliable environment where the researcher promised something and then delivered it.

You and I can do the same thing. We can train our ability to delay gratification, just like we can train our muscles in the gym. And you can do it in the same way as the child and the researcher: by promising something small and then delivering. Over and over again until your brain says, 1) yes, it’s worth it to wait and 2) yes, I have the capability to do this.

You may be saying “fascinating, but what does all of this have to do with mindful eating?”. The art of mindful eating has to do with the discipline of delaying gratification. When the limbic or “hot” system gets activated, we do things impulsively. For many of us that comes with turning to food to feel better. Here are 4 simply ways to “cool down” the limbic system, instinctive response.

1. Start small…incredibly small
I suggest you do this by incorporating body scanning throughout your day so it is 2nd nature to you by the time you need to use it.

2. Maintain consistency
I personally employed the Seinfeld Technique to achieve consistency. Get yourself a big wall calendar that has the entire year on it. Each day that you do a body scan, you get to put a red “X” on the day. Your job is not to break the red “X” chain. It isn’t about employing it before eating, or not, it is about doing the scan itself…everyday!

3. Find a way to get started in less than 2 minutes
When I first started doing body scans, I would do it when I was brushing my teeth in the morning. Then I moved to doing it when I brushed them at night. Then when I ate each meal. From there, I have added when I’m sitting at a stop sign and also incorporated breathing exercises into the body scan, etc….no it is second nature and I don’t even know that I am doing it, just that I am very self-aware of what I am doing…moment to moment throughout my day.

4. Improve one thing, by one percent
Mindfulness is about being present and not judging what happens. If you forget to scan your body and stress eat today, tomorrow you start again.

New Year’s is that time of year when we are all tempted to jump into a huge resolution to make changes to our eating, weight, wealth, or some other aspect of our lives. And what normally happens to those huge resolutions? We don’t stay committed. This year, why not commit to the 4 easy principles above and see if by March you’re able to say I have maintained my New Year’s resolution! Your mind and your body will thank you!

MJ Allen is here to help inspire both you and your practice. MJ holds a B.A. in Forensic Psychology, a M.S. in Clinical Mental Health and Counseling from Southern New Hampshire University and a Certificate in Meditation Instruction from the University of Holistic Theology. She is the owner of Presence of Mind Studio, offering in-person, donation only group meditation classes as well Mindful Live, a live stream mediation you can join from anywhere! For more information, visit: www.presenceofmindstudio.com.