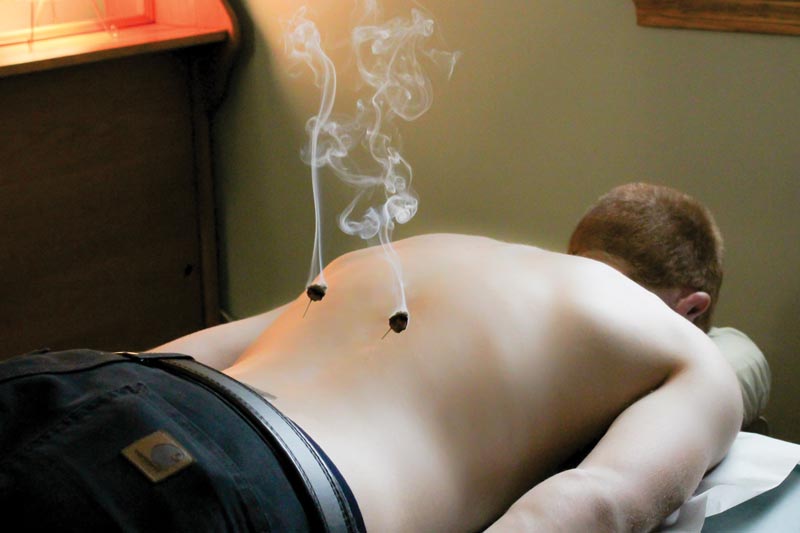 Mugwort and Wormwood; their names conjure up images of twisted trees, damp forest floors, and perhaps a boarding school for wizard-kids. It is not uncommon for a patient to make the obvious reference to a certain book when I refer to the herb used in moxibustion. Perhaps it is no wonder that our imaginations take us to unknown and mysterious places when we first hear these names. Afterall, it is the medicinal properties of these two herbs that have contributed to its history and mythology. The Mugwort plant was traditionally used to protect homes from “evil spirits” or, in our modern understanding, sickness. This early use of Mugwort for protection from illness likely stemmed from its antibacterial, antimicrobial and antiviral properties. Burning these herbs in the household was an effective way for early people to reduce contamination and spread of illness before the development of modern medicine and antibiotics.

In traditional Chinese medicine, moxa is commonly made by drying Artemisia Vulgaris, (Mugwort) or Artemisia Absinthium (Wormwood) and rendering the plant material into a fluffy cotton-like substance. This cotton-like substance is what is then used for moxabustion. The fun thing is, while this may sound like an herb from some distant place, many of us have it growing in our backyards. Mugwort is commonly found throughout many regions of the U.S. after having been brought here from its home of origin in the continent of Asia. In traditional Western herbalism, we can see many similar effects from Mugwort and Wormwood, when compared to their traditional Chinese medicine uses as moxa. Both Mugwort and Wormwood are considered to be “warming” medicinal herbs used for a wide variety of conditions and ailments. Looking at their functions or “actions” we can see some of the ways where these Western and Eastern traditions meet.

The Actions and Effects of Mugwort and Wormwood
The actions, or functions, of these herbs include; bitter (promotes appetite and aids digestion), anti-spasmodic, nervine (calms the nerves), immunomodulant, anti-inflammatory, anthelmintic (destroy parasitic worms), antibacterial and antiviral. Western herbalists use these herbs for conditions ranging from common cold, influenza, muscle spasms, arthritis, Lyme disease, parasites, and building the immune and nervous systems. While most of these uses are applied as internal treatment, such as in teas or extracts, many can be used as topical applications and smoke therapies, such as moxibustion. The actions of these herbs have a similar effect whether used internally or as a smoke therapy and both applications are beneficial in addressing inflammation, the immune and nervous systems and blood stimulation.

However, there is one advantage to using moxa as a topical smoke therapy and this is that it is one of the easiest and most effective ways to utilize the potently medicinal volatile oils that come from the plants. These volatile oils such as linalool and 1,8-cineole, would normally cook off in a water-based infusion, or may be too strong in an alcohol-based extraction. It is thanks to these volatile oils that gives moxa, and both plants it is derived from, their powerful actions on the body as well as the environment.

Moxibustion in the Acupuncture Treatment Space
Moxibustion is the act of burning mugwort for therapeutic effect by a licensed acupuncturist. Commonly referred to as moxa, there are several ways in which the acupuncturist can apply this technique. The two categories of application are direct moxa and indirect moxa. Direct moxa, or okyu, involves applying a balm to acupuncture points on the surface of the skin as a barrier, then lighting half-grain rice sized pieces of pure mugwort wool with an incense stick. Usually, multiple “threads” of mugwort are burned on each location until the patient reports feeling the warmth. Patients describe the sensation of direct moxa on the skin like that of a prick by a thorn or a small ember from a sparkler. An acupuncturist will spend many hours practicing the technique of rolling the moxa threads to the right size, lighting the threads with the incense stick, and dampening the threads with their hands should the threads burn too hot. It takes many years of practice for the acupuncturist to create consistency with rolling and burning the threads of moxa.

Indirect moxa can be applied on the skin with a thick barrier, such as on top of a slice of ginger, garlic, or on top of salt. There are pre-made moxa rolls on dime-sized cardboard adhesives that can be placed on acupuncture points. Indirect moxa consists of warming the point by placing balls of semi-pure mugwort wool to the head of the inserted needle, lighting it with an incense stick or lighter, and letting it smolder, providing the patient with an ambient as well as penetrating warmth. Mugwort can be compressed into poles offering another way to indirectly apply moxa to an area of the body by waving the lit pole slowly in a direction as to encourage flow of Qi. Both direct and indirect moxibustion produce smoke therefore it is best to apply it in a well-ventilated office.

The Result of 100 Okyu Threads
When I introduce thread moxa, or okyu into a treatment with a patient, I tell the patient to think of the okyu as old-fashioned laser therapy before low-level laser therapy was invented. It is said that mugwort burns at a certain frequency and has a penetrating effect. There is a story of a Japanese Doctor name Yoshio Manaka who burned 100 okyu threads on a single spot on a watermelon. When he sliced open the watermelon, he discovered a perfect brown line penetrating through the entire watermelon. He duplicated this experiment with other herbs, but no other herb produced the same result. I keep this story in mind when I apply okyu to areas of patients’ bodies that might be difficult to needle and think of the effect it has on reducing pain, especially in arthritic joints. Mugwort is not only used for its warming properties, but also its ability to dry dampness. This makes okyu particularly useful in reducing arthritic pain as arthritis is considered in Chinese medicine to be an accumulation of Cold and Damp in the joints.

Reducing Pain and Building Blood
According to the classic texts, moxibustion is used to treat cold and stagnant conditions. Research has demonstrated that moxibustion is beneficial in relieving pain, reducing inflammation, and supporting the immune system by activating white blood cell activity. Among the conditions for which moxa is an effective treatment are arthritic pain in the joints of the hands; inflammation from repetitive stress injuries, such as experienced with lateral epicondylitis; and acute pain from a recent injury such as after a fall on the ice. The most rewarding case studies come from addressing women’s reproductive health whether it be painful menstrual cycles or infertility. For these women and their families, moxa is truly life-changing.

Jessica Peck-Lindsey is a Doctor of Acupuncture and Integrative Health and owner of Peck’s Family Acupuncture in Waterboro. Dr. Peck-Lindsey holds a Master’s of Science in Pain Research, Education, and Policy from Tufts School of Medicine and is Certified in Traumatic Stress Studies from the Trauma Center at Justice Resource Institute. With the aim of being able to better provide for patients living with pain and traumatic stress, Dr. Peck-Lindsey opened the Wellness Center at Peck’s Family Acupuncture integrating therapeutic movement, trauma-informed yoga, Reiki, Emotion Code, Tai Chi, Qi Gong, and wellness coaching along with individualized acupuncture and massage therapy sessions. Dr. Peck-Lindsey can be reached at: jessica@pecksfamilyacupuncture.com.

River Anderson is a certified Herbalist, Reiki Practitioner, and the Owner and Operator of Ashwood Herbals. River is a graduate of the apprenticeship program of Greenwood Herbals, and student of the clinical apprenticeship. River works collaboratively with Dr. Peck-Lindsey at Peck’s Family Acupuncture creating custom blends of herb-infused muscle salves that are used exclusively at Peck’s Family Acupuncture. River can be reached at: info@pecksfamilyacupuncture.com or by visiting: https://www.facebook.com/AshwoodHerbals.